The cards in Origin work completely differently compared to the classic version of the game. Let’s take a detailed look at the card’s components: 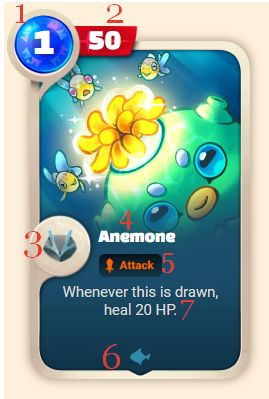 Right now, the most important tag we should be looking for is Innate. Knowing that all of our cards will be discarded at the end of the turn, Innate allows us to prepare a combination despite the discarding. Sometimes, powerful car combos are required to defeat Axies with healing abilities.

These special words appear in yellow:

Curse cards are added to your opponent’s hand and cause negative effects over time. However, often these cards harm their owners' teams. So, we wouldn’t recommend new players use them. However, a lot of experienced players are using them in a variety of quite creative combinations.

The utility cards are added to your deck. They have a bunch of useful advantages, but one stands out the most. Forest Wrath increases its effectiveness based on the number of debuffs on the opponent’s side.

Learning cards in Origin is a captivating process. Each time we’re doing it, we come up with several really interesting combinations, which we will be sharing with you as soon as we test them! So, don’t miss our future publications!