It’s time to share our first results and some useful insights about how to select your character.

The Plan vs. Reality

On June 6, we bought several NFT characters, and yesterday we got the results of the first week based on everything we’ve learned. The numbers will be given in % to make it easier to apply to your case.

We spent the amount of money, which we called "Total," and by the end of the week, we planned to earn 15% of that sum. We managed to earn 13.6%. The difference is acceptable to us, as we analyzed and predicted the outcomes without having our hands on the actual game. Our analyst did a good job. The plan didn’t take into account the random factor of receiving rewards in the form of Lstar tokens. As of right now, we have brought our planning as close as possible to real conditions. Originally, we planned to fully recoup the investment in 2 months. Even taking into account that random factor, we’re still going to meet this deadline. After analyzing the intermediate results, we revised our plan and, assuming a more or less stable situation with the game economy, we expect to earn 108 percent of the "Total" sum in seven weeks. Taking into account the visa, a parameter that determines the lifespan of the character, our net profit will be 138%.

Now let’s talk about how to make the right choice when selecting a character.

The data provided below is for informational purposes only and should not be taken as investment advice. Please keep that in mind.

Each character has several skills and abilities that determine their profitability, each of them to a different extent. In Let Me Speak, the most expensive character doesn’t always guarantee the biggest profit as a percentage. In fact, our analysis revealed that the return on investment for epic and legendary characters was even slower than that of uncommon and rare characters. In other words, while selecting a character in Let Me Speak, you should base your selection on the amount of money you are willing to spend and then choose from the available characters within your budget. In other P2E projects, there’s no point in buying the cheapest NFT - analog of an uncommon rarity in LMS, but in this project, this is totally viable.

First, you need to determine the minimum price of a character. 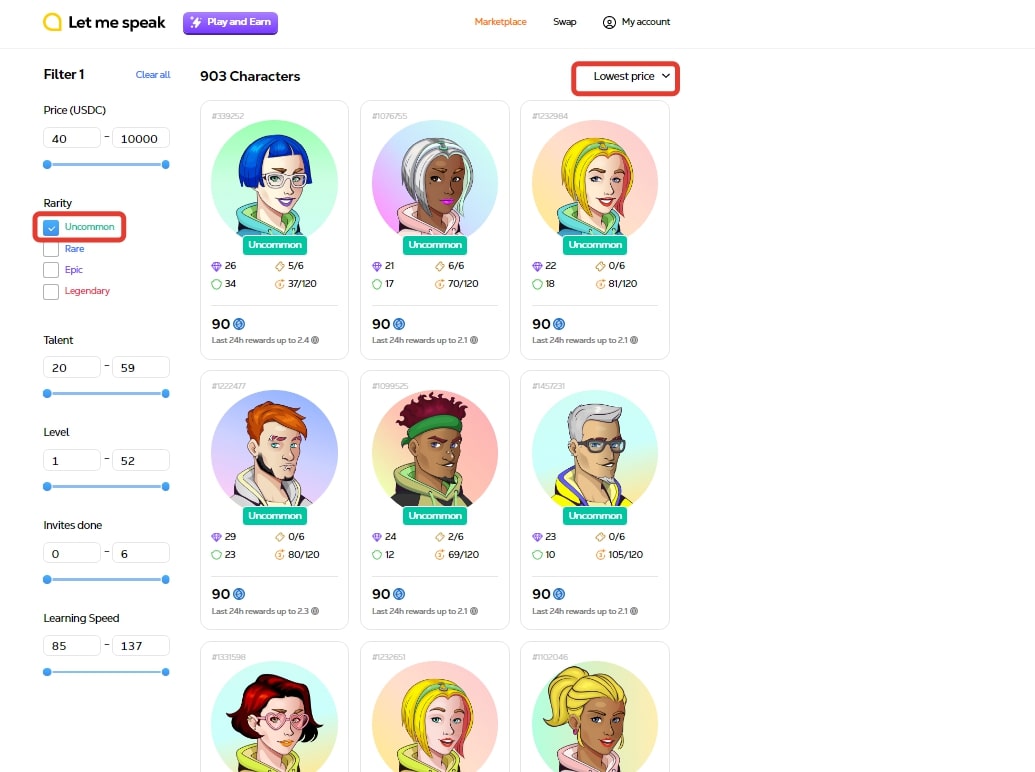 Select the filters as shown in the image above and scroll through the marketplace. If you take a closer look, you’ll notice that the first couple of pages have characters with pretty good visas. The Visa is the number of days that will give you profit from learning languages. When it expires, you can continue to learn, but you won’t be receiving any more tokens. As it stands today, you can extend the visa, but from an economic standpoint, this is not always a smart move.

As of writing this, the prices for uncommon characters with the biggest visa with 120 days on it start at $89.

Do All Talents Matter Equally?

Next, we would determine the best talent—a parameter that directly dictates the volume of daily earnings. Some of the talent ratings have been made public by the developers, as you can see below: 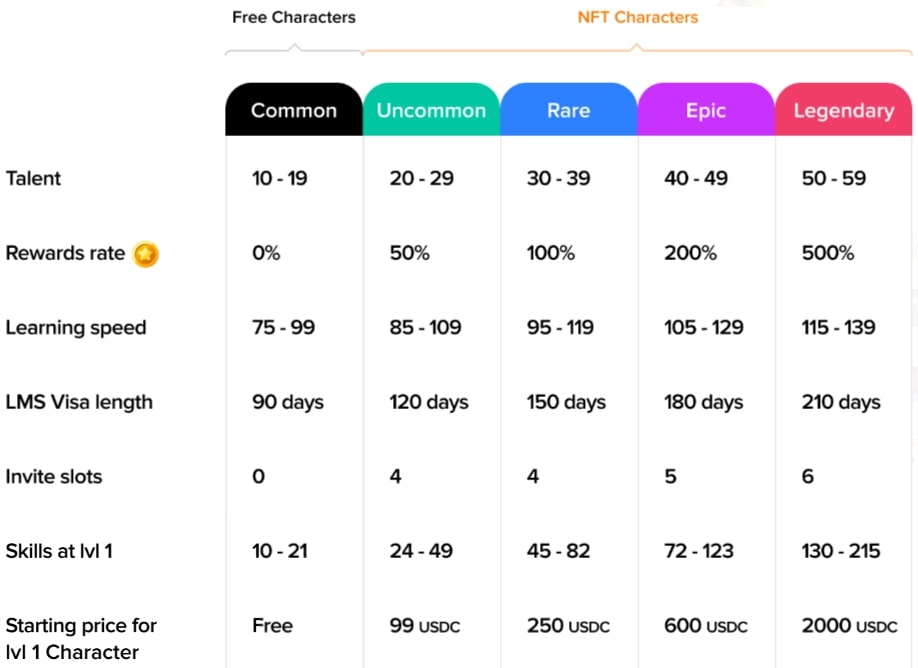 Each type of character also has divisions into sub-groups based on daily earnings. This is the kind of information we need to be looking for.

We go back to the marketplace, select the "Lowest price," and play around with the talent values in the filters. In the case of the uncommon character, let’s put 29 into the Talent field. Next, we would reduce this value by one and look for characters with good daily earnings, where it says "Last 24h rewards up to…". 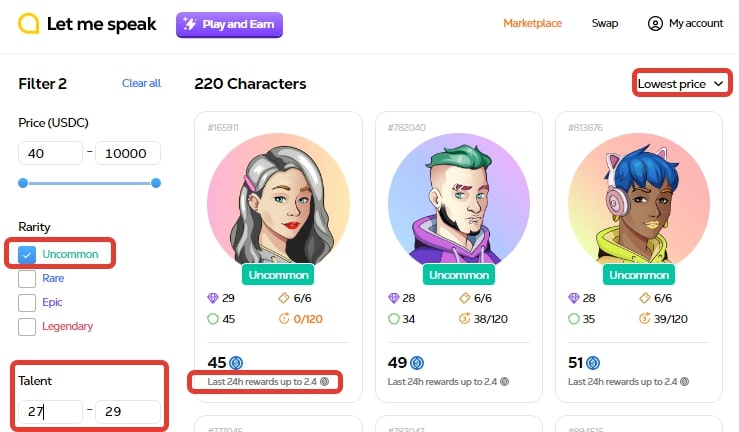 The next parameter we want to focus on is the Invite. Each character initially has six slots for invites. These slots get locked as characters are used to create a new NFT. This is a whole different mechanic, which we won’t go too deep into in this article. If you have no plans to "breed" characters, it would be more profitable to buy a character with a couple of slots already closed.

Skills Are Important Too

The character’s skills don’t have a significant effect on the earning potential either, but with ceteris paribus, we based our choices on the preferences of our students. If a student is more interested in studying grammar, we will find a character with this particular skill is the most developed. This isn’t critical because, during the process of learning, all of these skills upgrade on their own. 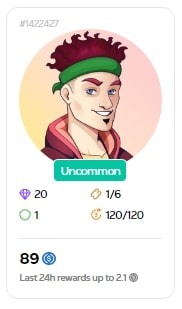 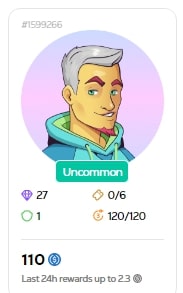 A character with a higher Talent value will pay off in 55 days and will bring you an additional $130 in profit.

We didn't used to look at characters with used visas, but while we were writing the article, we found a few NFTs that were quite profitable, so we won't ignore them in our future research.

The information provided here is only relevant at the moment of writing this article. We will continue to follow the progress of our projects, so stay tuned if you want to be up to date with these games!