One of our favorite teams of Axies that can apply poison.

At the start of the test, we were primarily using these teams. However, today we have a more diverse roster of builds. If you’re interested in learning how the poison builds work in Origin, the following is for you. 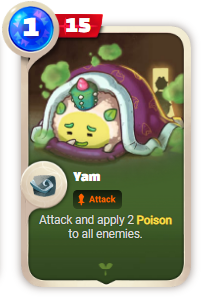 You can’t imagine a poison build without the card Yam for front Axie in the classic version. Origin has a similar tendency. Although the way Yam works in the new version has changed a little, this card is still needed for a tank of the team. Leaf bug, Serious, Bidens retain their value as well. At the same time, the new cards of eyes and ears provide the ability to, for example, heal the team. 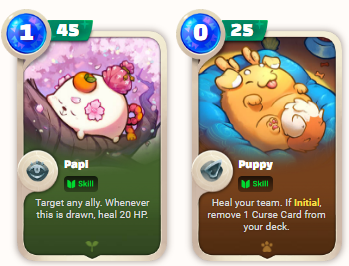 Therefore, Origin’s poisonous tank appears to be even more beefy and can help the mid-laner and the back-laner if they’re being attacked by backdoor Axies.

Garish Worm is a card that is used to make the highlights on Youtube. In 2.0, this card worked in combination with other cards played on the same turn as the Worm. In Origin, it can apply a poison effect even if played alone. We really like it when two Axies in a team have this card.

The Grass Snake card has significantly changed. It now costs 1 energy and instead of applying the poison effect, applies a curse that lasts 4 turns! In general, Origin offers more debuffs and ways to combine them. Which is why Bidens will be quite a valuable asset in a deck as, in theory, it is a good counter for the Poison build. A lot of negative effects can be removed using this card. Right now we’re testing a team with such a card, and we’ll share our data about its effectiveness in one of the future posts.

In conclusion, the poison builds in Origin are very good. Its worst enemies are the damage dealers, like Beasts that can easily remove the entire health pool from a poisonous Axie. To defeat such a team, one would need to apply a curse debuff on the enemy’s main damage dealer.

Another kind of build Poison will be struggling to defeat are the healers. There’s not a lot that can be done against such teams. But do not be discouraged! Not only do the cards decide the outcome of any battle, the skill is what really matters. A lot of times, a strong team loses because it was played poorly by an unskilled player.